Beauty is but the disclosing

Of a fallen darkness

And of the light arising from it 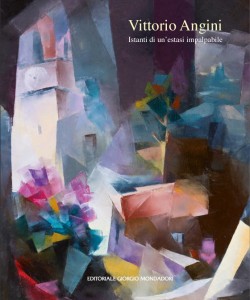 During different phases, which have marked the evolution of Vittorio Angini’s expressive research, a few recurring peculiarities stand out: for example, an exquisitely emotional approach remains stable in its core, in spite of the changing views – in terms of style – of surrounding landscapes.
Permeated, since the beginning, with an intimacy devoid of mawkish notes, the painter’s works are remarkable for a unique realistic frame, linked to a rich romantic inspiration. Nature, in Angini’s very first painting experiences, has the melancholic aspect of «his» countryside: barns lost in fog and village houses in rows with human-like silhouettes, and deserted paths. A traditionally Tuscan setting: it resounds with the Macchiaioli movement, without actually imitating their renowned patterns. A different blend marks the colour setting of Angini’s paintings, which disclose lights at times suspended in a surreal evanescence.
The use of a putty knife subsequently replaces the customary brush. Subjects, and, gradually, the framing also, change. Animated by his usual drive towards the authentic, Angini first de- velops a series of portraits – mainly friends and family – and then a few more elaborate sub- jects (the Mostri meccanici): large cranes and excavators – in a narrative context which suddenly takes on accusing tones – becoming disturbing protagonists of a meaningful allegory, where transparent ruins appear as a mysterious message, inhabited, in its depths, by vaguely prophetic hints.
In this major creative phase of Angini, one may catch a flash of that magic realism which will later reach full expression. The artist has been optically twisting his own images (Il sogno del pianista, Cortona), with suggestive interpretations, somehow connected to the refined teach- ings of the Cubist masters. However, there is now an additional pictorial intention, rich of lu- ministic, as well as sentimental notes.
There is a growing perception of something which belongs, also, to remote recollections. Where memories tremble, inebriated with charm and thrill, there occurs an involvement that no painter could forego. Angini thus returns with his mind to places which first quickened his heartbeat. He explores them as if in a dream plot – expanding or downsizing their key points as well as their architecture, adding zesty atmospheres which celebrate unknown idylls, sum- ming up the moments of an intangible bliss able to offer excitement and rapture to the most sensitive viewers.
One may thus feel the air becoming still, as if stunned, in certain alleys, whilst fragrances of mulberry, lavender, myrtle and scotch fir pervade one’s nostrils . Life, as it should be, keeps dawning and waning in those houses, beyond solid walnut doors which silently guard secret losses and true stories – the ones we may want to hear once the day is over, sinking into dusk, and when the evening drowsily anticipates a new night.
Angini has painted and still paints intriguing nocturnals. Sealed in an ethereal world, they
host charming moon glimmers, smears of mother-of-pearl light stroking the plaster of worn- out houses, and minute windows now turned into alert eyes in front of the world.
Each single view maintains, as usual, a vibrant imaginary basis, the intense vocation of a painter, Angini – inspired as only a few others -, who blends, unsubdued, colours and won- ders, architectural perspectives and moods, the ultimate meaning of beauty and values, to be seen – today, more than ever – as healthy anchors.
Florence, October 2013.

The monograph is published by Mondadori in January 2014