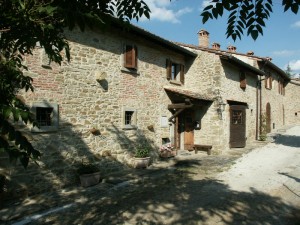 Vittorio Angini’s Home-Studio is situated in Bagnaia, a few kilometers far from Arezzo downtown, along the old Cassia Way which, going across the VALDICHIANA Valley, leads to Rome.

BAGNAIA is a place-name clearly showing the presence of a thermal spa during the Roman age, which it is still possible to see the ruins of, being them now taken over into the outside walls of a close villa.

In the medieval age, under the influence of the powerful Benedictine Abbey of St. Flora and Lucilla, a series of blockhouses and sighting towers were built in that same area. But when Arezzo city-state, in order to oppose the political and economic power of the Abbey, forced the monks to move into the city walls, (1196), these structures lose their strategic importance becoming rural buildings. So, the “mansio” (stage) of Bagnaia changed in a “farm worker’s house”.

After a lot of changes it became part of the possessions of La VERNA Franciscan Province, and then it was purchased by Vittorio Angini who turned it into his own Home-Studio, after a meticulous and thorough restoration work.