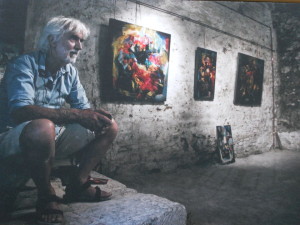 He was invited to the Siena figurative arts exhibition and to the “Bolsena Arte 82” show. Three of his artworks appeared in the touring exhibition “Mondial 1986”.

Angini attended the “UnoAErre” Goldsmith art and Jewellery School, where his fine artistic skills made him popular amongst important goldsmith’s centres in Arezzo and lead him to a collaboration with Rome’s Private Mint.

In 2007 he was invited by Josè Van Roy Dalì, son of the famous Catalan painter, to participate in the “Quadriennale d’Arte Contemporanea Leonardo da Vinci”, which took place in Rome at the “Vittoriano”.

Since 2009 his works have been included in the art project “In Mostra con Dalì” and exhibited in the “Galleria Tondinelli” in Rome.

In 2012 he participated in the “Affordable Art Fair” in London and in 2013 in the “Tuscan Art on Tour” in Chicago and Menasha in the USA. Works of the artist are permanently exhibited at the Barley Twist Gallery in Chicago and Hinsdale (USA).